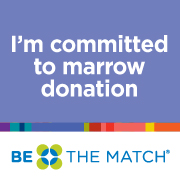 DNA is an amazing tool to determine your ancestry and verify or expand your family tree. But that specific genetic mix from one’s ancestry also plays a crucial role in finding matches for those needing life saving bone marrow transplants! Thank you to my dear friend, Elizabeth, for agreeing to share her story!

I was diagnosed with a blood cancer in May 2011, one month before my 36th birthday. As most people say, it was a shock for me to hear I had cancer; it was definitely not the diagnosis I was expecting when my doctor called me.

I can’t say I’d ever given much thought to blood, bone marrow, or genetics prior to my diagnosis. I had a bad experience one time donating blood so I wasn’t a regular donor, but I would always donate if a friend needed a blood transfusion. When I was a teenager, a family friend had leukemia and needed a bone marrow transplant. I remember my mom explaining to me what leukemia was and what a bone marrow transplant was, but it wasn’t something I gave much thought to in the subsequent 20 years. Then, a few years ago, the son/brother of dear friends from church had cancer and was in desperate need of platelets. Neither my husband nor I knew what platelets were, aside from being some kind of blood product, and we didn’t know what the donation process involved, but we donated our platelets to help our friend’s son. Even with these personal experiences of blood cancer and blood products, it never crossed my mind to investigate being a bone marrow donor, nor did it force me to become a regular blood donor. It also never crossed my mind that I would be the one on the receiving end of the generosity of others through blood, platelet, and bone marrow donations.

Following numerous failed chemo and radiation regimens, including an autologous stem cell transplant, I had to undergo an allogenic bone marrow transplant to live and have any chance of living a cancer-free life. An autologous stem cell transplant uses the recipient’s own peripheral stem cells. The donation process is a lot like donating platelets: you’re hooked up to a machine with needles in each arm (or through a central line catheter). The blood is pulled out, blood cells (red, white, platelets) are separated by the machine, and then blood is returned to the body. Since I had cancer and was using my own cells, my cells were then “washed” to rid the cells of any possible remaining cancer.

Allogenic transplant uses a donor’s stem cells or bone marrow. The donor can either be related or unrelated. When looking for a match, siblings are typically tested first; even though they’re the first tested, siblings only have about a 25 percent chance of being a match. Parents can also be tested, but that is usually in the case of pediatric patients. The testing being done is called HLA (human leukocyte antigen) typing. This is not the same as matching blood type. HLA is a protein, or marker, found on most blood cells. You inherit these markers from your parents—three from your mother, three from your father. The more antigens that match, the higher the chance of transplant success. A perfect match is 6/6. The immune system uses these markers to know which cells belong to your body and which do not. I have one full sibling, who was the first tested as a possible match. He was not a good match; he was barely a half match. Until recently, it blew my mind how my full sibling could be only a half match, but as I’ve learned more about DNA and genetics from my friend Beth, I’m starting to put the pieces of the puzzle together and understand why he didn’t match.

When my brother was determined to not be a good match, my transplant coordinator turned to the National Donor Marrow registry. To be included in the registry, people send in cheek swabs of saliva. These samples are held in the registry. These saliva samples are searched for initial possible matches. In my case, I had seven total possible matches. I thought that was pretty good until I learned 1) there are tens of thousands of people in the registry, and 2) most people get 100-200 initial hits. After learning this, I felt a little defeated. I asked my transplant coordinator why I didn’t get more hits, and all she could tell me was I had one weird antigen, or marker, that made it difficult to match. She couldn’t tell me, though, what that weird marker was. We know HLA types are inherited so the best chance of finding a suitable donor is someone with a similar racial or ethnic background. The more diverse one’s tissue type, the lower the chances of finding a suitable matching donor. This is why it is so important that people of all racial backgrounds join the registry.

I can’t remember how many of those seven responded to the initial request, but I think it may have been four, maybe five. The next step was for those initial hits to have a blood test. Of those who got the blood test, I had two matches. TWO! And, neither of those were a perfect match. The woman who eventually became my donor was an 8/10 match.

Here’s where things get really interesting, and where I’ve learned so much about bone marrow and DNA. First, I am now allergic to shrimp. Allergies live in the bone marrow, and a shrimp/shellfish allergy runs in my donor’s family. She doesn’t know 100% for sure if she’s allergic because she’s never had shrimp or shellfish. Why, you may ask? Her mom is severely allergic to shrimp and shellfish so my donor never had it growing up! Based on the reaction I have to shrimp, now, I find it safe to say she would have a similar reaction. Allergies aren’t something recipients are told unless it’s a life-threatening allergy like a peanut allergy and the person carries an epi-pen, so it’s just kind of a fun game to try new foods after the transplant and see what happens.

Second, I recently learned my donor and I may have an ethnicity in common. My husband commented one day he thought my donor and I looked kind of alike: we both have dark hair, dark eyes, and a darker skin tone. I have some Native American blood and I thought from the beginning that may have been the weird marker that made it difficult for me to find a matching donor. So, one day, I emailed my donor and asked her if, by any chance, she had some Native American blood. She replied that she…DID! This now made me even more convinced that my Native American was the weird marker. But, one thing still didn’t make sense to me—if I’m part Native American, then my brother, who is a full sibling, would also be part Native American so why wouldn’t he be just as good a match as a my donor. I mean, it’s crazy that a complete stranger could be a better match than my full sibling. Beth has been explaining genetics to me and helping me understand what we inherit from each parent. Beth sent me to a link on http://www.ancestryinsider.org that explained siblings from the same parent inherit different DNA from the parent. In the case of me and my brother, the Native American DNA is on our mother’s side. The post goes on to state that, going down several generations, you have less and less DNA from a particular ancestor. After enough generations it’s possible for cousins to share no DNA. In fact, if you have your children tested, it’s possible they won’t have all the same ethnicity depending on what they each inherit from the two parents. Some of y’all may be thinking, “duh, don’t you know anything about biology,” but biology and the chapter on genetics wasn’t exactly my strongest subject. So, my brother did the saliva DNA test and the Native American didn’t show up in his results. I’m now convinced more than ever that is why he wasn’t a good marrow match. I think once I do the DNA test we’ll have an even better idea if that was the marker that kept my brother from being my bone marrow donor.

Another thing that’s interesting about bone marrow transplant and DNA is that I am now a mish-mash of DNA. If I do a saliva DNA test, my DNA will be my original DNA, what I was born with. If I do a blood DNA test, though, I’ll match my donor because my bone marrow is no longer mine. This is a concept that I’m fine with seeing as my original bone marrow was tainted with cancer. Just because I like to make things interesting and complicated, I will eventually need a kidney transplant for my kidney failure. And, I’m curious if my brother may now be a good kidney match since the matching goes beyond HLA typing. So, I’ll have my original DNA, the DNA of my donor that lives in my bone marrow, and a third DNA from the donated kidney I eventually receive.

If you haven’t already, please consider getting swabbed and joining the bone marrow donor registry. You don’t know whose life you could save! Visit www.bethematch.org for more information. I also used the Be The Match website for information for this post.

Elizabeth is a freelance writer and public relations specialist. She spends her time educating the public about bone marrow donating as well as donating blood and platelets.

Copyright © 2015 Beth Wylie and Life in the Past Lane. All rights reserved.