Working on my previous post, I had the privilege of being introduced to Wade B. Fairey, Sr., one of the co-founders of Roots and Recall.  In addition to this fabulous website  that  “connects genealogy to the homeplace,” Wade also has a distinguished career in historic preservation in South Carolina.  Genealogists are also often preservationists in spirit.  As someone who adores historic properties, and whose heart breaks whenever I see one torn down, I took the opportunity to do a Q & A with Wade about his career, life influences, and what’s next for Roots and Recall.

LPL: Tell me how you got started in historic preservation and how growing up in York County, South Carolina, influenced your path.

WF: I grew up here with tons of historic buildings being abandoned and neglected by their owners – no interest in or no money to maintain.  I also witnessed a gigantic percentage of Rock Hill’s historic fabric demolished during urban renewal projects, this included my great grandparents’ home.  I was powerless to do anything about it but knew as a young man, I didn’t like it.  Several members of my extended family owned an early 1960’s book, Plantation Heritage of the Upcountry.  This book opened my eyes to tons of privately held plantations of interest and then in 1969 my family’s extensive land holdings and their antebellum home were donated by a great-aunt (kin by marriage only), to the State of SC for educational purposes.  Everyone in the family was devastated – we got nothing out of the house or anything from the estate.

LPL: How did your own family history contribute to your career?  Have your researched your family history? If so, what were some surprising/interesting discoveries?

WF: I was very fortunate in that my grandmother Fairey’s sister, Rosa Bee Guess had extensively documented several branches of our extended family.  She did a magnificent job and passed this information on.  She had also been the curator of a large number of family manuscripts and letters which she wisely kept and donated for safekeeping to the Carolinian Library.  It is today one of their largest publicly used collections.  I was really not interested in papers or charts, what interested me was their home and photographs.

My parents were very influential in nurturing my interest in history, though they really wanted me to pursue our family history of medical service.  By the time I was 14 or so, I had visited Colonial Williamsburg three times as well as most public house museums from Charleston to DC.  On one Sunday afternoon, my dad helped me visit the abandoned building at what later became Historic Brattonsville, I was 10 or 11 years old and I feel in love with the old abandoned structures.  I was hooked! 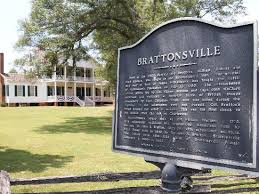 LPL: In the About the Founders section of your website, you mention Historic Brattonsville, and its influence on both you and your co-founder. Tell us a little more about the scope/importance of this site. (side note- I have been there myself on two occasions and was delighted to see it as part of the location in The Patriot).

WF: I became the Executive Director of HB in 1977 after spending two years restoring the architectural components of the Homestead House and the Col. Wm. Bratton home.  Early on, I wrote a manuscript about the sites and discovered little was really known about the houses themselves, everything previously tackled the people and events.  No one at that point understood the evolution of the two main houses.  Rusty and I began dissecting the construction features of these two houses and all those that we could find – Architectural Forensics LLC was born.  At the time we had no opportunity to receive doctorates in preservation, it was not until the late 1970’s anything such as this was available, and so we are totally self-taught.  We began logging data on buildings, examining journals, researching artisans, and thus the SC Artisans Database was also developed – a list of some 15,000 artisans working in SC prior to 1870.

HB is a microcosm of history – a place where five generations flourished from the 1760’s – 1920s.  I know of no other site which can tell the story of such a family or the changes that went on in one community.   HB has become a stepping stone for scholars and museum administrators at Colonial Williamsburg and many other larger facilities.

LPL: Tell us about another preservation project that held special/significant meaning for you, either because of your personal connection to it, or because of the impact it had.

WF: In the early 1980’s I was driving by an abandoned house in Chester Co., SC, stopped and began looking.  The owner stopped and explained to me he was in the process of razing the house for the beams to use in his modern home.  The house was so early and so important, I offered him $10,000., for the house and three acres.  I didn’t have a dime to my name but purchased the house and began restoring it with help from my family and friends.  The house turned out to be Chester County’s oldest home – The Aaron Burr House or the Lewis Inn.  The house was truly an intact piece of 18th century architecture featuring the finest hewn logs I had ever witnessed.

LPL: What is a structure that was “lost” that affected you? What are some historic structures that you feel are endangered?  Either locally or regionally?

WF: The one I couldn’t save that affected me most was perhaps not one house but the street scape, “Oakland Ave.,” in downtown Rock Hill.  Unfortunately, the political leaders in many areas deemed major streets as commercial here as well as throughout the USA.  This was perhaps the worst mistake – devastating to the preservation of neighborhoods.  Oakland was a section created in ca. 1895 to connect what is now Winthrop University and downtown Rock Hill.  It was by far the loveliest of streets and lined with fine homes.  Today only about 40% remain, the balance were demolished for progress.

Another one I really wish I could have saved was a rural Carolina “I” house style built by members of the Moore family in York and Chester Counties.  It had been abandoned for decades but remained in remarkable condition, massive beams, double chimneys, exquisite mantels and a very fine staircase.  Its owner refused to allow anyone to save it and thus it was burned on a winter night by arsons.

LPL: How did the idea for Roots and Recall originate? “Connecting genealogy to the home place” is such a great concept!

WF: R&R grew out of our desire to link historic data to specific addresses.  Rusty and I had been collecting thousands of images and data on houses throughout mostly S.C.   I was intrigued with a computer’s ability to link and assemble data and so we began working with a patent attorney to legally protect our “home-place” preservation program.  It has been a remarkable learning experience and the best part has been engaging with likeminded individuals.  We sincerely believe we are each drawn to our historical places even when we are unaware.  Case in point,  I purchased a farm near HB in 1995, where I now live, not knowing that it had belonged to my GGG grandmother Sara Fox Strait in the 1820s.

Rusty lives in his grandfather’s home.

LPL: What has been the biggest achievement for Roots and Recall thus far?

WF: R&R’s significance is its ability to link information across vast geographic areas.  With the internet individuals from all walks of life and all regions can explore their roots and each have stories and memorabilia to share.  We have saved many collections from being dumped and once we scan them, they go to a regional archives for preservation.

The best example of how it serves is by linking data and information.  Example:  a contributor wrote an excellent article for posting on R&R about the Rev. Archibald Whyte.  Once posted on R&R it was only a short time before a user from Penn., bitterly complained as to how the article had depicted the scoundrel who had orchestrated the tar and feathering of her forefather, in 1840s Fairfield County, S.C.  Within weeks R&R was able to link her information with that we had previously received from the SC Dept. of Archives and History, and three other private sources to tell a complete history of the where, when and who concerning the incident.  Without R&R this data would have continued being random information with no connectivity that makes it far more interesting and important.

LPL: What is next for Roots and Recall?

WF: We have recently assembled a team of experts; marketers, programmers, and internet architect, and others to help redesign R&R and make sweeping changes to how it looks and works.  R&R has become so large, some 25,000+ sites, we are moving to a custom platform which will not just focus on SC but the USA.  Our plans are that it will continue being free, easier for individuals to load their own materials, and offer the means for institutions to use it as a massive repository of data for dissemination.  Individual input, building one address at a time across America, will continue being our focus but several cultural institutions are now engaged in helping redesign the program to meet their own needs.  In this manner, their massive collections will be hosted and displayed on R&R – interfaced with the R&R program to expand the base of knowledge and information furnished to the user.

Furthermore, we hope in 2016 to begin offering a R&R Roundtable for Preservation – a symposium designed to discuss and learn about historic building, architecture, etc.

Thanks to Wade for agreeing to participate in this Q&A!  Don’t forget to visit Roots and Recall!

Copyright © 2015 Beth Wylie and Life in the Past Lane. All rights reserved.